THE KINGSHIP OF CHRIST

THE KINGSHIP OF CHRIST
LAST SUNDAY IN OCTOBER 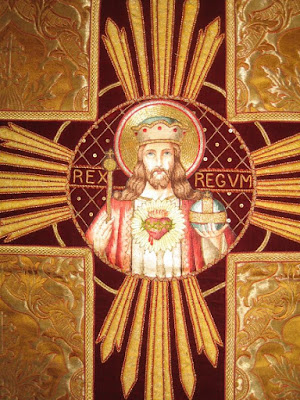 The Feast of Christ the King was approved by the Congregation of Rites December 12, 1925. The three hymns given below were composed for the Office. The author is not known. Like most of the hymns in the Breviary they are written in iambic dimeters.
In instituting the Feast of Christ the King, the Church did not bestow upon Christ any new title. His Kingship is repeatedly mentioned in both the Old Testament and in the New.  Christ is not a King merely by figure or by courtesy. While His kingdom is not of this world, His teaching commands obedience in the minds and hearts of men both in their home life and in their social and business relations. Nor does this apply only to individuals, but to societies, cities, states and nations. Wherever there is a question of ethics, justice, morality or religion, there Christ's authority is supreme. Modern secularism would banish Christ from the family, school and state, all unmindful of the greatest fact in history that unless the Lord build the house, they labor in vain that build it (Ps. 126, 1).


For a popular explanation of the Feast itself, see the pamphlets on it published by the Catholic Truth Society and by the America Press. For a dogmatic and more extensive treatment of the subject, see Dr. Fahey's The Kingship of Christ according to the Principles of St. Thomas Aquinas and The Social Rights of Jesus Christ the King (Dublin, 1932). See also "Christ's Kingship" in the volume on Soteriology in the Pohle-Preuss' Series of Dogmatic Textbooks, pp. 149-164, and Wilhelm and Scannell's Manual of Catholic Theology, pp. 196-207. There is an article by Father Husslein on the "Liturgy of the Feast" in America, Feb. 27, 1926. Translations of the hymns: (1) Two translations of these hymns with much valuable comment have appeared in the Ecclesiastical Review. See the issues for October, 1926 and November, 1934. The former was contributed by Msgr. Henry, the latter by the Eev. James Veale. (2) Translations of hymns 174 and 175 by Allan G. McDougall appeared in the Ave Maria in 1926. (3) The same two hymns were translated by Francis W. Grey and are found in one of the C. T. S. pamphlets. (4) Father Husslein translated hymn 176 for the article mentioned above. The editor acknowledges his indebtedness to both the translators and publishers for permission to use the translations that accompany the latin hymns.

THEE, Lord of every age, we
sing:
Thee, Christ, we hail the nations'King;
Confess Thy right Thy realm tofind
Within the hearts of all mankind.
The hate-swayed mob cries, prideenticed,
They will not have Thy kingdom,
Christ;But we, exultant, round Thy
throneThy reign o'er all creation own.
0 Christ, our Prince, that bringest
peace, Let every rebel impulse cease:
And sheep astray Thy love would
Fain Bring back to Thy one fold again.
For this Thine arms wide-stretched
in plea Hung bleeding on the atoning
Tree; For this the spear's revealing dart
Laid bare Thy love-enflamed Heart.
For this Thou dost Thy glory hide,
Outpouring from Thy pierced side
The riches of Thy love divine
Beneath the veils of bread and wine.
May realms and they that rule, them vie,
With solemn rites to raise Thee high;
May laws and arts Thy servants be,
All life be sanctified in Thee.
Their kingly gear and royal state
Kings to their King shall conse-crate;
Subjects their all before Thee lay
In service of Thy gentle sway.
Jesu, to Thee, beneath whose sway
All earth shall bow, all praise we
Pay;
With Father and with Spirit be
All glory Thine eternally.
Amen.


LITURGICAL USE: Hymn for Vespers. TRANSLATION by Allan G. McDougall.
1. " We confess Thee, 0 Christ, to be the Prince of every age, the nations' King, and the sole Ruler of the minds and hearts of men." Christ is the King of ages (I Tim. 1, 17); He is the nations' King, as is evident from such Messianic Psalms as 2; 71; and 109; and from Dan. 7, 13-14. Other kings may enforce external obedience to their decrees, but Christ commands an internal obedience which is wholly beyond the power of earthly rulers.
2. "The wicked mob cries out: 'We will not have Christ reign over us!' But we joyfully proclaim Thee 'King supreme over all mankind!' " When Pilate said: "Behold your King," the mob cried out: "Away with Him! Away with Him! Crucify Him!" (John 19, 14-15).
3. "0 Christ, our Prince that bringest peace, bring also rebellious hearts under subjection; and, because of Thy love gather into Thy one fold the sheep that are astray." Christ is the Prince of peace (Is. 9, 6-7). For the nature of the peace He brings, see John 14, 27. The likening of Christ's gentle rule to the kindly solicitude of a shepherd for his flock is a favorite figure in the Scriptures. Of Him-self He says: " I am the good shepherd" (John 10, 11). And He is to bring into His fold all stray sheep, that there may be one fold and one shepherd (John 10, 16).
4. l i For this, with arms wide-stretched, Thou didst hang upon the blood-stained Tree; for this, Thou didst lay bare Thy Heart burning with love, and pierced with a cruel spear." The Crucifixion scene (John 19, 6-34).
5. "For this, Thou hidest Thy glory upon our altars under the appearance of wine and bread, pouring forth from Thy pierced side salvation for Thy children." Read hymn 79: "Hidden God, devoutly I adore Thee."
6. "Let the nations' rulers extol Thee with public marks of honor; let teachers and judges worship Thee, and laws and arts give expression to Thy love."
7. "Let the insignia of kings be comsecrated to Thee in humble submission and shine resplendent; beneath Thy gentle scepter bring Thou our country and the homes of its citizens." "The insignia (crown, scepter) of kings" is here a poetical way of referring to the kings themselves.
8. " 0 Jesus, Thou whose sway is over all earthly rulers, to Thee be everlasting glory, together with the Father and the Holy Spirit who worketh our good." The term almus (aloy to nourish) means propitious, indulgent, forgiving. It is used of the Holy Ghost because He imparts or increases sanctifying grace and thereby nourishes the soul.

To rule each nation, tribe or clan.
0 Flower of a Virgin-birth
0 Head of all on earth who dwell,
0 Stone that from the mountain
fell
And with its vastness covered
earth!
The race of men, condemned to lie
Beneath the direful tyrant's yoke,
By Thee at length the shackles
broke
And claimed the Fatherland on
high.
Lawgiver, Priest and Teacher,
God—
With these the title well accords
Of "King of kings and Lord of
lords"
Upon Thy vesture writ in blood.
With grateful hearts Thy rule we
bless
Who justly reignest over all:
Them only truest joys befall
Who Thee as King and Lord confess.
To Thee, 0 Jesus, ruling o'er
Earth's rulers all, be glory meet,
With Father and the Paraclete,

Throughout the ages evermore!
Amen.


LITURGICAL USE: Hymn for Matins. TRANSLATED by Monsignor Henry.
1. " 0 Thou Eternal Image of the Most High, and Light of Light, God; to Thee, 0 Redeemer, let there be glory, honor, and kingly power." Christ is the uncreated Image of the Most High, begotten of Him by an eternal generation (I Col. 1, 15; II Cor. 4, 4), and the Light of Light, eternal with the Father, and the source from which all created light in men, angels, sun, moon and stars borrows its luster.
Light of Light (Nicene Creed).
2. "Before all ages Thou alone wert the hope and the central point of time, to whom the Father justly entrusted supreme dominion over the nations." Christ stands between the two Testaments, the Old and the New. Men looked forward to His advent, now they look back. For Christ's universal sovereignty see stanza 1 of Hymn 174.
3. '' Thou art the flower of a chaste Virgin, the head of our race, the stone fallen from a mountain and filling all the earth with its mighty mass.'' Tu flos: a reference to Is. 11,1. Mary was of the house of David. David was the son of Jesse. Hence Christ was a flower that came forth out of the root of Jesse. Caput: Christ is the head of the Church, which is His mystical body (Col. 1, 18). Lapis: This figure is taken from Dan. 2, 34-35; 2, 44-45. Bead the whole chapter and see how Christ's kingdom is to witness the ruin of earthly kingdoms, and will itself endure forever. This figure of the stone is also found in Hymn 167, the Roman Breviary version of the hymn for the Dedication of a
Church.
4. "Through Thee, the condemned race of mortals, who were subject to a cruel tyrant, broke their chains and claimed heaven as their home." Bamnata stirps: The human race condemned because of Adam's fall (Gen. 3). Eefregit vincula: Christ, by His death, broke the chains of sin and freed man from the tyranny and servitude of Satan.
5. " 0 Teacher, Priest and Lawgiver, Thou displayest on Thy garment this title written in blood: 'Lord of lords and Most High King of Kings'." Christ combined in His Person the threefold dignity of Prophet, Priest and King. The term prophet in its wider sense denotes a teacher. It is used in both meanings in the Scriptures. Ohrist exercised the functions of a teacher in the most exalted sense of the term. The title referred to is from Apoc. 19, 16, with alterations necessitated by the meter. Sanguine is probably from Apoc. 19,13.
6. "We are willingly subject to Thee who rightly rulest over all; to be subject to Thy laws, this constitutes the true happiness of citizens.''

HIS glorious banners on the air
Triumphantly unfurled,
To Christ, the King of Kings, give
praise,
Ye nations of the world.
No kingdoms fall beneath His
sword,
In bloody conquests grim,
But lifted on the Rood He draws
All things by love to Him.
Thrice happy city, basking fair
Beneath His royal sway,
Where at the mandates from His
throne
All hearts with joy obey!
No godless conflicts there shall
rage,
But Peace outstretch her hand,
With smiling Concord at her side—
Firm shall that city stand!
Where wedded love shall keep its
troth,
And youth can blossom fair,
And all the household virtues pure
Shall grace the threshold there.
Then may Thy reign in splendor
come,
0 King, most true and sweet!
Till all the earth by love subdued,
Shall worship at Thy feet.
To Thee be glory, Jesus, King!
O'er crowns and scepters high,
With Father and with Holy Ghost,
While endless ages fly.
Amen.

LITURGICAL USE: Hymn for Lauds. TRANSLATION by-
Father Joseph Husslein, S. J.
1. " Christ everywhere triumphantly unfolds His glo-rious banners; 0 nations, on bended knees joyfully salute the King of kings.  Vexilla: The Cross is Christ's banner. See the note on Hymn 51, Vexilla Regis prodeunt.
2. "He brought nations under subjection not through the ravages of war, nor yet through force nor fear, but lifted high upon a Tree He draws all things to Himself by the power of love." "And I, if I be lifted up from the earth, will draw all things to Myself. Now this He said, signifying what death He should die" (John 12, 32-33).
3. 'l Thrice happy is the state over which Christ reigns in justice, the state which perseveres in obeying the laws (jussa) which were made known to the world from above.'*
4. " There no impious wars rage, for peace always strengthens treaties; concord smiles, and rightful civil order stands firm."
5. "Fidelity preserves matrimony; youth grows up in chastity; and modest families abound in domestic virtues." It is worthy of note that the Feast of Christ the King was proclaimed by Pius XI, the same Pope that wrote the Encyclical on Christian Marriage.
6. " 0 most sweet King, may that light of Thine for which we long illuminate us; and may the subject world adore Thee, when bright shining peace is firmly established." Lux ista: the light of God's countenance, Divine favor. 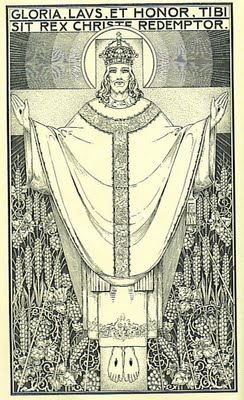