with Saint Thomas Aquinas
taken from the Official Site of the Dominicans of Avrillé. 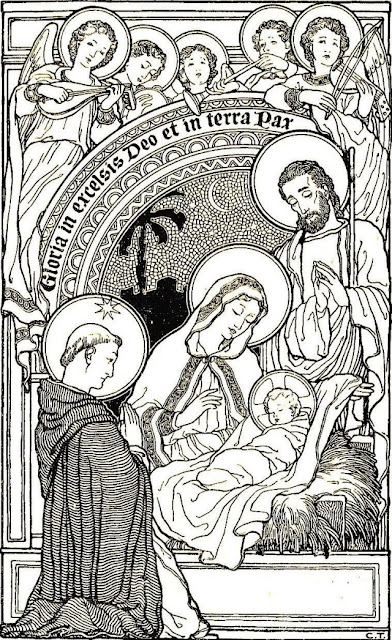 The Circumstances of Christ’s Birth

1. Christ willed to be born at Bethlehem because of two reasons:

— First, because “ He was made … of the seed of David according to the flesh, to whom also a special promise was made concerning Christ. ”  (Rom. I, 3.)  Hence, He willed to be born atBethlehem, where David was born, in order that by the very birthplace, the promise made to David might be fulfilled.  The Evangelist points this out by saying, “ Because He was of the house and of the family of David. ”
— Secondly, because as Gregory says, “ Bethlehem is interpreted ‘the house of bread’.”  It is Christ Himself, Who said, “ I am the living Bread which came down from heaven ” (Jn 41, 51).
As David was born in Bethlehem, so also did He select Jerusalem to set up His throne and to build there the Temple of God, so that, Jerusalem was at the time a royal and priestly city.  Now, Christ’s priesthood and kingdom were consummated principally in His Passion.  Therefore, it was becoming, that He should choose Bethlehem for His birthplace and Jerusalem for the scene of His Passion.
Likewise, also, He silenced the vain boasting of men who take pride in being born in great cities, where also they desire especially to receive honor.  Christ, on the contrary, willed to be born in a mean city, and to suffer reproach in a great city.

2. Christ was born at a suitable time.

— “When the fullness of time was come, God sent His Son, made of a woman, made under the law.” (Gal. IV, 4.)  There is this difference between Christ and other men; that, whereas they are born subject to the restrictions of time, Christ as Lord and Maker of all time, chose a time in which to be born, just as He chose a mother and a birthplace.  And hence, since “What is of God is well ordered,” and becomingly arranged, it follows that Christ was born at a most fitting time.
— Christ came to bring us back from a state of bondage to a state of liberty, and therefore, as He took our mortal nature in order to restore us life, so as Bede says, “He deigned to take flesh at such a time that, shortly after His birth, He would be enrolled in Caesar’s census and thus submit Himself to bondage for the sake of our liberty.”
— Moreover, at that time, when the whole word lived under one ruler, peace abounded on the earth.  Therefore, it was a fitting time for the birth of Christ, for “He is our peace, Who hath made both one,” as it is written. (Eph. II, 14.)
Again it was fitting that Christ should be born while the world was governed by one ruler,because “He came to gather His own, Children of God, together into one” (John XI, 52), so “that there might be one fold and one Shepherd.” (John X, 16.)
— Christ wished to be born during the reign of a foreigner, that the prophecy of Jacob might be fulfilled (Gen. XLIX, 10), “This sceptre shall not be taken away from Juda, not a ruler from his thigh, till He come that is to be sent.”  Because as Chrysostom says, “as long as the Jewish people were governed by Jewish kings, however wicked, prophets were sent for their healing.  But now, that the Law of God is under the power of a wicked king, Christ is born; because a grave and hopeless disease demanded a more skillful physician.”
— Christ wished to be born when the light of day begins to increase in length, so as to show that He came in order that man might come nearer to the Divine Light, according to Luke I, 79: “To enlighten them that sit in darkness and in the shadow of death.”
— In like manner, He chose to be born in the rough winter season, that He might begin from then to suffer in body for us. (3 a. q. 35 a. V and VIII.)
(From: Saint Thomas Meditations for every day, by Fr E.C. McEnery O.P., Columbus [Ohio], Long’s College book company, 1951)
Postado por Ir. Raimundo de Pennafort, T.O.P. às quarta-feira, dezembro 23, 2015