An Interview with Dom Tomás

Translated by Michael Fuller from the original Portuguese at Non Possumus. 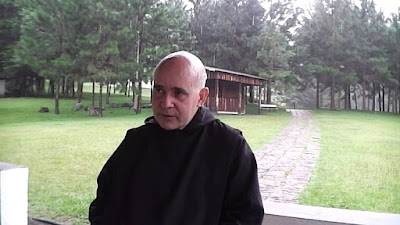 1. Reverend Father, why is another Bishop needed for the Resistance? Does a state of necessity subsist in the Church? Aren’t the traditionalist bishops of the SSPX enough for the Church, as the SSPX states?

The Church needs Bishops because Our Lord wanted it like this. So, Tradition needs Bishops. The work that Bishop Williamson has done since 1988 is enormous. The help that Bishop Faure brings is indispensable, and a third bishop is not too much. Tradition came to count with seven bishops when Bishop Lazo from the Philippines came over to Tradition before the deaths of Archbishop Lefebvre and Bishop De Castro Mayer. The Resistance is nothing more than the continuance of Tradition.

2. Some people say that your consecration will constitute a schismatic act. What can you say in this regard?

Just like the 1988 consecrations did not constitute a schismatic act, in the same way, this one also will not.  The reason that motivated the first consecrations is the same that motivates the other ones, that is, the fact that Rome does not return to Tradition.

Evidently, this new consecration can receive criticism, just like the consecration of Bishop Faure, but for those that attentively consider the reasons, it concerns consecrations motivated by the very same motive of the 1988 ones: the fact that the Basilica of St. Peter is occupied by enemies of the Our Lord. It’s a painful fact, but it is fact. To deny it proves to be irrealism, an accusation made by Bishop Fellay to his three brothers of the episcopacy: Bishops Williamson, Tissier, and De Galarreta.
This new consecration is motivated by nothing more than the same motives that made Archbishop Lefebvre act, nothing more and nothing less. The only difference is the special circumstance in relation to the authorities of the Society, but in relation to Rome and the crisis, the reasons are the same and are identical in every way.

3. Father, last year, motivated by the consecration of Bishop faqure, the SSPX said that the Resistance is sedevacantist and that that is demonstrated by consecrating bishops without the permission of the Roman authorities. What is your response to this other accusation?

4. Father, what is your position regarding sedevacantism?

I think that the position of Archbishop Lefebvre in this regards is the most sensible and the most prudent. The Pope cannot use his authority to destroy the Church, so we don’t obey him in this work. We refuse to have any part in the destruction of the Church. As far as deciding if the Pope has lost his pontificate because of this, it is a disputed issue. We don’t have the means of withdrawing a conclusion that eliminates all doubt. So then, with doubt, it is best to not affirm that the seat is vacant and continue to consider him the Pope.

5. Last year we asked Bishop Faure what he would do if he were invited to the Vatican by Pope Francis. Now we ask you the same question. Would you go? What would you say to Francis?

Go to Rome? Only if it were to ask if the Roman authorities accept Quanta Cura, Syllabus, Pascendi, etc., but for now I think that the answer was already given and it is negative.

6. Professor Carlos Nougué has posted a brief article about your life where he mentions the incident of the pressure you received from the authorities of the SSPX for having refused to sing the Te Deum in celebration of the motu proprio Summorum Pontificum (July of 2007). Can you tell us anything about this and about other circumstances when you were under pressure by the leaders of the SSPX?

7. Reverend Father, did your experience in the monastery of Le Barroux serve to strengthen your opposition to the going astray of the accordista drift or rallié of the SSPX?

Yes, there is something similar in the admiration that Dom Gérard had for the then Cardinal Ratzinger and the admiration, or at least, consideration that Bishop Fellay has for Benedict XVI.

Dom Gérard used to say that Archbishop Lefebvre stayed in his corner in order to refuse to come in contact with the Roman representatives and that Cardinal Ratzinger was a man that it would be possible to deal with. Dom Gerérd did not know the Cardinal and did not want to learn from the experience of Archbishop Lefebvre. I think that Bishop Fellay has committed the same error. The advice and views of elders is something fundamental in life. Saint Thomas, when speaking about docility, points to this disposition of the soul that we must have with elders. It is worth reading article 3 of the question 49 of 11a IIae. It is very instructive. Dom Gerárd did not take into account the advice and warnings of Archbishop Lefebvre. Bishop Fellay would act very differently if he also contemplated this, I believe. This question deserves an entire study regarding the attitudes of Dom Gerard and Bishop Fellay. I think that both were lacking in t he prudence of Archbishop Lefebvre.

8. Can you tell us how the split came about between your monastery and the SSPX in 2012?

The separation between our monastery and the Society was gradual due to another incident. But in 2012, when Brother Arsenio as well as myself wrote to them about the dealings with Rome, and moreover when Bishop Williamson was in our monastery and received our total support, the rupture was made.

Nevertheless, we maintain good relations with some members of the SSPX that see the problem, although they believe that it is better to remain in the SSPX for now.

9. Father, you knew Archbishop Lefebvre. Can you tell us something about him?

Archbishop Lefebvre possessed the strength and the tranquility of those that are certain about the well founded principles of what they are doing, and this was united to a great readiness to attend to souls. His tranquility came from the robustness of his Faith and his common sense. Certitude generates tranquility, so the certitude of Faith is superior to everything else. From this we can see the total tranquility that Archbishop Lefebvre presented in every occasion. He was a true bishop, as Saint Paul describes it, who acted in a way to save his own soul and the souls of others that listened to his words and counsel. His motto from his coat of arms summed up his attitude and his action: Credidimus Caritati.

10. How would you explain the change that has been done in the SSPX regarding a practical agreement with Rome and what do you think with happen to the Society?
I think that there are members of the Society that want an agreement and have been working in this sense for many years.

Maybe Bishop Tissier and Bishop De Galerreta accepted the change from what had been decided in the 2006 General Chapter in order to save from the Society from an internal division.
Only God knows what will happen with the Society. I pray that it returns to its past fervor, but it will be difficult to return as things once were.

Not being together with the Society, I have difficulty in giving a fundamental opinion. From what I have heard and read, I believe that the Society will try to arrive at an unstable equilibrium composed of legality and fidelity. But they will fight on the turf chosen by the enemy. From a tactical perspective, it’s not very smart. The liberty to preach against the Holy See will remain (and is) paralyzed. Even more so, Bishop Fellay seems to think differently from Archbishop Lefebvre, despite his denial of this. This is fatal for the SSPX.

11. Reverend Father, can we speak of a true and actual liberalism within the SSPX or would that be an exaggeration?

In bringing oneself closer to Rome, there is no way of avoiding liberalism.

12. Father, how would you define the resistance and how do you see its future?

13. What will be your priorities as bishop?

To give the Sacraments and assure the preaching of the Faith.

14. What will be the motto of your coat of arms and its meaning?

The motto will be “Veritatem Dilexisti” (Thou hast loved Truth) taken from Psalm 50. The coat of arms is the backside of a miraculous medal with the 12 stars (the 12 articles of the Creed and the 12 Apostles), the Cross, the “M” of the Most Blessed Virgin Mary, and the Sacred Hearts.
In the beginning, Brazil had the name of the “Land of the Holy Cross”. This is also the name of our monastery.

Our congregation was dedicated to the Most Sacred Hearts of Jesus and Mary by our founder, Rev. Fr. Jean Baptiste Muard, in the 19th century.

15. Finally, Reverend Father, would you like to send a message to traditionalists, in particular, to the Resistance?

Moreover, read and search for understanding in the great anti-liberal authors, especially those that understand the errors of the modern world, like Bishop De castro Mayer, Archbishop Lefebvre and also Bishop Tissier who expounds upon the strange theology of Benedict XVI with precision and who gave us the biography of Archbishop Lefebvre, not to mention the ancient authors, whose list would be too lengthy here. Remember Bishop Vital, the great Brazilian bishop and friend of Mgr. Ségur, who vigorously combated masonry and because of this was incarcerated and probably poisoned because he died a little after having been released from prison due to serious digestive problems. Remember also Mgr. Pie and, for Brazilians, Gustavo Corção, whose book, “O Século do Nada” (The Age of Nothing), should be known by all. Corção understood the evil of the times very well: the lie, since he said that the 20th century could be called the age of the the lie. The remedy to this is in its opposite: “Veritatem dilexisti”.

Dear Father, we give enormous thanks to God, His Most Holy Mother, Saint Jospeh Protector of the Church, and Saint Benedict for the great blessing that the Resistance receives with your consecration. We ask God to give you a highly fruitful episcopacy. We give many thanks to you for having accepted such an important responsibility and to Bishop Williamson and Bishop Faure because they will consecrate you as a successor of the Apostles. Deo grátias!
Postado por Unknown às domingo, março 06, 2016