Fr. Bouchacourt approves of the mortal sins of his priests.

Translated by Michael Fuller from the Spanish text at NON POSSUMUS 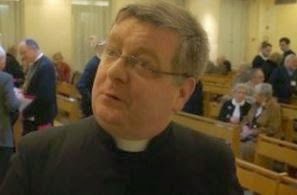 These are the facts:

Mrs. V is an 87 year old zealous and pious catholic.  She has consecrated herself to the SSPX priory in Perpiñán decades ago. In March of 2015, Mrs. V, together with some friends, received Bishop Williamson in her home to attend Mass and listen to a conference on the liberal encyclicals.

Since that day, Fr. De la Motte, the SSPX prior in Perpiñán (incardinated in the diocese several days ago), refused to give her Holy Communion, even when she presented herself at the communion rail.

Threatened with being expelled from the chapel which she had dedicated herself so much, Mrs. V asked him several times why he judged her behavior to be mortally sinful.  In fact, how does receiving a catholic bishop consecrated by Archbishop Lefebvre, who has neither more nor less jurisdiction than his brother bishops in episcopacy, constitute a grave moral culpability that would justify the refusal of communion.

For Fr. Renaud Joubert de la Motte, "the situation of Mrs. V is not complicated", as he explained to one faithful from Perpiñán outraged because of this scandal.  He called upon Mrs. V to ask her to renounce receiving Bishop Williamson in her home (by what law?) and he "warned her of the sanctions if this act became public" (by what law?).  In order to admit Mrs. V again to communion, Fr. de la Motte demanded from her "a letter of forgiveness for having received Bishop Williamson in her home, one Sunday, during Mass of the priory" and "a letter of obligation to not promote a bad spirit and seek to convert others to the famous resistance (which she certainly did not do) within the priory..."

Fr. de la Motte ordered his representatives to deny communion to Mrs. V and this was done against canon law of the Church.

Canon 853 says very clearly: "any baptized person who is not prohibited by law, can and must be admitted to Holy Communion".

And Canon 855: ss1 "all those publicly unworthy are to be barred from the Eucharist, such as excommunicates, those interdicted and those manifestly infamous, unless their penitence and emendation are shown and they have satisfied beforehand the public scandal [they have caused]."

ss 2 "But occult sinners, if they ask secretly and the minister knows that they are unrepentant, should be refused; but not, however, if they ask publicly and they cannot be passed over without scandal."

After several weeks of refusing communion to Mrs. V, a declaration of solidarity, signed by 25 faithful of the 40 present, was sent to Fr. de la Motte.  During that time, Mrs. V, who had fought since the very beginning against the conciliar revolution, asked a young vicar how she would be able to make her Easter communion and was told that her only option would be with the Fraternity of St. Peter...

The superior of the district of France was informed by a layperson from Perpiñán.  Fr. Bouchacourt responded "frankly".  She drew near to Bishop Williamson "criticizing Bishop Fellay", her "superior" and her "religious family". [note from translator: the possessive adjective "su" leaves the impression that the subjects were "of Mrs. V"-her-, which would only be true if she were a 3rd order member of the SSPX, although not stated.]  Fr. Bouchacourt forgot to specify if the criticisms were made with a legitimate reason or not, but did not hesitate to say:

"I could not admit it because I have an esprit de corps. By his attitude, Bishop Williamson is dividing tradition. In coming through France, as he does, he is subversive, and receiving him so that he can act in this way is not morally good. Father de la Motte warned Ms. V. The prior's order is not against faith or morals. It was necessary to obey. The role of the prior is to ensure the unity of his flock. Bishop Williamson behaves like a wolf. You have to keep away from him and prevent being harmed. The organization of a priory is not democratic."

Everyone will appreciate the solid theology of this leader of the SSPX:

As a child of the Archbishop, who taught us to disobey men in order to obey God,this explanation is unsatisfactory.  Fr. Bouchacourt preaches then the unity in iniquity; he maintains that receiving Bishop Williamson in your home goes against faith and morals and conceives the organization of a priory as a tyranny.

a) The priest must always refuse communion to those who are notoriously and publicly unworthy (excommunicates, interdicted, public sinners, heretcis and schismatics, even in good faith...)

b)  The priest can deny communion to any occult sinner, on the condition that it is done secretly and without scandal (any act that may produce a moral culpability in another is scandalous).

Meanwhile, Fr. de la Motte has decided to abandon the SSPX in order to unite with the conciliar church.  During a Mass celebrated for his departure (nowadays these gestures are celebrated in the SSPX), the simple ceremony appeared to be more of a simple change of priors than the treachery of a combatant (and they say that nothing has changed in the Society!).  A vicar took to saying that he had abstained from any rash judgement and announced that "Fr. de la Motte left the SSPX in order to be at the service of the diocese of Versalles".  Oh!  What elegant terms used to express these things!  The deserter has been converted into a good shepherd!

Fr. Rousseau, after having been sanctioned for his reaction against the pseudo-canonizations of Francis, was catastrophically designated the new prior of Perpiñán. Years and struggles have not made him more clear-sighted.  He went to the home of Mrs. V to inform her that if the wanted to receive communion again in the priory it was necessary to promise not to receive Bishop Williamson or any other person of the resistance.  In short, a vile and hateful blackmail with the sacrament... Mrs. V, 87 years of age and tired of being a victim of such unjust persecution eventually gave in.

Nobody can blame her.  Not the Good Lord or even men.  Those who are more deserving of rebuke are Frs. Bouchacourt, de la Motte, and Rousseau and his vicars who have committed a grave moral culpability.

The SSPX has completely lost its mind.  They not only act in an abusive manner as if there were ordinary jurisdiction over the faitful while forgetting of the simple supplied jurisdiction, but they also contradict, without any scruples, the most holy laws and the most grave moral theology of canon law.  The SSPX hides its doctrinal weakness with a nefarious pastoral hardening.

The moral theology of St. Alphonsus de Ligori indicates that no "censure can be imposed against people of which there is no jurisdiction".  The SSPX does not have ordinary jurisdiction over the faithful of Christ.  Let us recall what Archbishop said about "supplied jurisdiction" :

However, it should be noted that a supplied authority does not have the same characteristics as the authority that exists ordinarily in the Church. It is not a territorial jurisdiction as the diocesan bishop or parish priest: it is exercised only on those who resort to her. Supplied jurisdiction is exercised case by case, in so far as it is not habitual, that is that the people who benefit from it may remove themselves and supplied authority has no power to bring them back. It depends on the necessity of the faithful, being that there is a state of crisis. It is to the extent that the faithful have need of these bishops or priests for the salvation of his soul, that the Church created this bond of authority among them. All this shows that supplied jurisdiction gives limited authority and is very delicate to practice. The judicial authority of the bishop, not a coming from a Roman nomination, but comes from the necessity of the salvation of souls, must be exercised with a particular delicacy (Archbishop Lefebvre, note of the 20th of february 1991, cited in Le Sel de la Terre n 87, page 142- my translation)

The sad case of Mrs. V is a supplementary proof that the dominance of the SSPX has converted into a perverse dominance.  The good of souls is no longer the goal of the authorities of the SSPX other than in a purely rhetorical manner... the repressions, expulsions and sanctions that the SSPX has shown everywhere demonstrate a grave deviation both morally and doctrinal.

Bishop Fellay has clearly said on the 20th of December in the seminary in La Reja: the official Church is the visible Church.  It is the Catholic Church period! [1]

All who dare to contradict this peremptory judgment will be destroyed and crushed in one way or another. But be assured: nothing has been signed!


Addendum of the Blog NON POSSUMUS: on the other hand, Fr. Bouchacourt is a public sinner since having publicly denied the deicide committed by the Jewish people.  He should be denied the sacraments and not even be allowed to administer them as long as  penitence and emendation are not shown and he has not satisfied beforehand the public scandal   (can. 855ss1).