No Compromise with Modernist Rome!

No Compromise with Modernist Rome!

Transcript of a Sermon

Given in Chicago, Feast of the Circumcision,
1st January 2015 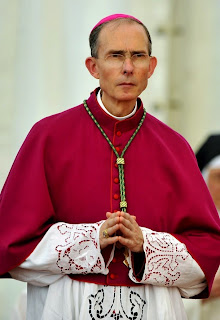 The feast today of the octave of the nativity of Our Lord and the circumcision of Jesus Christ.
Let us hear first the epistle of St. Paul to Titus:

Beloved, the grace of God our savior has appeared to all men, instructing us, in order
that rejecting ungodliness and worldly lust, we may live temperately and justly and
piously in this world. Looking for the blessed hope and glorious coming of Our Lord,
great God and Savior, Jesus Christ. Who gave Himself to us, that He might redeem us
from all iniquity and cleanse for Himself an acceptable people pursuing good works.
Thus speak and exhort in Christ Jesus, our Lord.


And the Holy Gospel of Our Lord Jesus Christ according to St. Luke, chapter 2:

At that time, when 8 days were fulfilled for the circumcision of the child, His name was
called Jesus. The name given him by the Angel before he was conceived in the womb.

My dear faithful, in the name of Rev. Fr. Charles Ward, our prior, and of my confreres, our priests and my own name, I wish you a happy and saintly new year. Although, the situation of [the] crisis in the Church is worsening. After the recent episcopal synod, in October 2014, in Rome. Let us, my dear faithful, let us oppose our happiness with true Faith. And our saintliness of the state of grace and of our striving towards holiness of all Christian virtues against the unhappiness and sadness of this world. Full of heresies and apostasy, the loss of the Catholic Faith. And let us also oppose our happiness, Christian happiness, against the impiety of sin of all kinds. The advocates of which are the most important of the authorities in the Church. The Church, my dear faithful, on this feast day, the first day of the year, is used to sing first of all a Miserere at the end of the past year. To express our sadness for our sins and our hope for forgiveness for the sins of past year. And to sing today, a Te Deum, at the beginning of the new year. To thank God for giving us one year more. To praise Him. To serve Him. In saintliness and justice, as St. Paul says to Titus.

And to grow into holiness. To compensate the impiety of our generation by the piety of
our Christian life. Let me, my dear faithful, let me explain to you the sadness of the crisis in
the Church and in the world. To leave you a few advice, of hope, in this new year.

So first point, the sad increase of the seriousness of the crisis in the Church today. The world and the Catholic Church, it's Herself, experience what Sr. Lucy of Fatima called a diabolical disorientation. Diabolical; from the Devil. Planned from the Devil. Planned from the Freemasonry. Years and years and centuries ago, that is satanic. A satanical disorientation that is to say that, man cannot lead himself toward the true orientation. Man is lost. First of all, in the world and secondly, in the Church Herself. First of all in the world, the disorientation in the world. For instance, the wars of the islam against Christians in Pakistan, in Iraq, in Syria and many other countries. Where Christians are killed, tortured, chased, exiled. Where churches, treasuries of liturgy and Christian culture, are destroyed. Daily. By the warriors of the so-called “islamic state”. With a complicity and the weapons of our own countries. It is horrible. And these crimes are sins that call for God's wrath. And in our own countries, not only in Iraq and Syria, in our own countries in the West, the millions of innocent children die daily. On the knives and the chemical poisons of medical torturers and executioners, what we call the sin of abortion. You understand?

These are the wide scale renewal of the murder of the Holy Innocents. There is now a sea of blood covering our countries and howling towards heaven for vengeance. For God's vengeance. That is the world of today. And now the Church of today. The last synod of the bishops in Rome has advocated the acceptation by the Church of so-called “marriages”, you know what I mean. Unions between two men or two women. That is a crime of Sodom and Gomorrah in the Old Testament in your Holy Bible. You can read it; how God punished the sin of Sodom and Gomorrah. These two towns full of sinners, of such sinners, attracted upon them and their two cities, the fire of heaven. Were put in ruins, their cities. And the ruins of which, are still existing if you visit Palestine, you will see the ruins of these towns on the amount of sulphur and toxic salts. As the visible sign of the reprobation and chastisement by God and of the proof of their shameful sins. That is a synod of Rome to advocate sodomy.

And secondly, the same synod accepted to contemplate the access to the Holy Communion of those Christians who are married, and then divorced, and “re-married”. The word re-married is wrong, because no true marriage is possible. Not at all re-married, but united by a civil union, which is only a legal concubinage. A legal concubinage. I search in my dictionary the word “concubinage”; I could not find it! It has disappeared from the dictionary. Interesting! You cannot find this word because concubinage, that is to say the horrible cohabitation of unmarried man and woman, or unmarried young man and young woman, is not more considered as a sin. As a shame. As a reprehensible behavior. Thus, speaking of concubinage today, is an uncorrect [sic] way of speaking. It ought not figure to appear in the dictionary. They suppress sin, it is simple! But we do not suppress the existence of the sin. So it is impossible to people who are still married, who divorced and then pretend to remarry. It's impossible to go to receive the Holy Communion!

They are in a state of mortal sin! I do not judge themselves, but I judge the state in which they are. They are unable, unworthy to receive the Holy Communion! The Holy Communion is a sign of our union of our soul with God! And the Holy Father, our Holy Father, Pope Francis, my dear faithful, what a shame! He did not immediately condemn such proposals of the synod, but he postponed. He delayed the decision to the following synod this year. And he said that he agreed with Cardinal Kasper the advocate of these criminal attempts again the holy virtue of chastity and against the holiness of Christian marriage.That he agreed with Cardinal Kasper! And then, our pope, poor Pope Francis, you know, that he punished the Franciscans of the Immaculate who wanted to keep back, to take back the Holy Mass of all times!And he condemned them, he removed their superior general and he forbade them to say the Traditional Mass. Only 6 priests among almost 200 priests are allowed to pray the Traditional Mass. All the others are forbidden to pray the True Mass! By order of Pope Francis. That is the situation in the Church!

Second point, be sure, my dear faithful, be sure there is no question of making any
compromise and compromission [sic] between the Society of St. Pius X and the occupying
powers of the church. We never will draw [the Society of] St. Pius X to the new religion. St.
Pius X would not have accepted to be reconciled with the new religion! So, be sure, there
will be no compromise, no compromission [sic] with the powers occupying the church. And
let us try to watch first on our survival in this crisis of the Church. On our survival which
may be, will be the salvation of the Church Herself! So second point, no question of
compromise.

And my seventh point, the last, is that the problem, my dear faithful, is not to search what we could do in Rome. What we could do in the conciliar church! No! The only question is to know what testimony we ought to give today in the church. In front of the church. Publicly in the church. What testimony we ought to give to the church. As true Catholics! As a light on the candlestick and not under the bushel of the Second Vatican Council. What is our duty? It is to bear witness! To bear witness for the Tradition of the Church! It is very simple. As true Catholic faithful. As saintly Christians who strive through their saintliness, first of all, let us continue praying our daily Rosary! The great means given by Our Lady to save our souls and the Church. Now, let us pray our daily Rosary, let us practice the 5 First Saturdays in spirit of expiation of the sins committed against the Immaculate Heart of Mary. Let us continue our devotion to the Immaculate Heart of Mary. Secondly, let us persevere. Keep on, in the true Catholic Faith, in the true catechisms, in the true Catholic Mass, in the true teaching of the Church, in the true Catholic schools. And thirdly, let us persevere, let us keep on striving towards saintliness. Our Lord Jesus Christ said, in the Gospel, “he who shall persevere to the end, he shall be saved!” I would say, he who shall persevere in the Faith til the end of the crisis in the Church, he will save his soul and the Church! Thanks to the intercession of the Immaculate Heart of Mary. Amen.