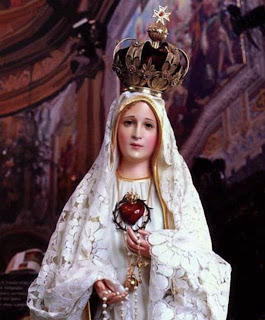 Is Russia’s Consecration out of date?
It’s indispensable, however late.
When on June 13, 1929, Our Lady of Fatima appeared to Sister Lucy at Tuy in Spain to ask for the Consecration of Russia to her Immaculate Heart, it made perfect sense, because ever since the Russian Revolution broke out in October, 1917, Russia had been persecuting the Church and acting as the main instrument of Communism to spread its deadly errors throughout the world. However, Russia is now playing such a different part on the stage of world affairs that a number of Catholics are wondering if that Consecration is still needed. Has it not been overtaken by events?
True, with the fall of the Berlin Wall in 1989 the Russian people began to repudiate the godless Communism under which they had suffered so much for 70 years, and since then they have not ceased to evolve towards God instead of away from him. Leading this evolution has been Russia’a Prime Minister or President since 1999, Vladimir Putin (born in1952), who by his personal example and public leadership has done all he could to promote the real revival of the Christian Orthodox religion within Russia. Some observers still doubt that Putin is genuine, but the fruits are there: thousands of churches and cathedrals rebuilt all over Russia and morality defended, while outside of Russia Putin has more than once delayed the outbreak of World War III by outwitting the delinquent Western politicians, puppets of the godless New World Order and pushing for its triumph.
Then can one say that Russia today no longer needs to be converted? No, because Orthodox Christianity is not yet Catholicism, and because Communism has reportedly left its mark on the morals of the Russian people, for instance in the still widespread practice of abortion. But what one can surely say is that by the present religious revival, witnessed for many a year now by Western visitors to Russia, Our Lady is preparing for the full conversion of Russia, and while that full conversi on may no longer be needed to put an end to Russian Communism, in the 21st century it may be even more needed to overcome world Globalism. Let us speculate on how that might happen.
To break out of the aggressive encirclement of Russia by military bases of a nameless western power which has let itself be instrumentalised by the evil Masters of Globalism, Russia, the apparent but not the real aggressor (the two are not always the same), invades and conquers Europe thoroughly corrupted by atheistic materialism. Under the pressure of war and occupation, the Pope at last performs the Consecration of Russia, as requested by Our Lady at Fatima, and the miraculous full conversion begins to take place, but not to the putrid religion of Conciliar Rome, rather to a brand-new (and brand-old) Catholicism (Mt.XIII, 52), in which all the Truth of Eternal Rome and of the once faithful West is revitalised by the religious freshness of the post-Communist Russians drawing on everything truest and best in their own Eastern traditions.
Wishful thinking? The details here stitched together from prophecies, and even the grand lines of the speculation can be wrong, but in any case some such miracle will be wrought by Our Lady to cleanse the East of its errors and the West of its corruption, so that the Church can again breathe with both lungs, and so that there can come about that “period of peace for the world” which she promised at Fatima. In any case believers will be crying out with St Paul, “O the depth of the riches of the wisdom and of the knowledge of God! How incomprehensible are his judgments, and how unsearchable his ways!” (Rom. XI, 33). If we are among the survivors, we shall be marvelling at the works of God and of his Blessed Mother.
Kyrie eleison.