The Gender Ideology, the Imminent Chastisement and Francis' Climate Change

The Goal of A Majority that Accepts Homosexuality as the Norm

Since "who am I to judge" came here to Brazil for WYD, the sodomites have been demanding respect with more success from the common idiots.  They recently had a parade in Rio where a transvestite was carried on a float hanging on a cross and pre-pubscent boys publicly danced scandalouly while wearing hardly any clothes.  Apparently, the Brazilian bishops had initially supported the parade, and the Archdiocese of Sao Paolo even published a letter showing its full support in what it stated was "defending human rights" so to speak [1] . This has all happened this month and some of the less conscious Catholics had no problems sharing the images while denouncing them, something I don't think of as a correct approach.

The Socialist government PT, worker's party of Brazil, headed by an ex-prisoner and convicted bank robber Dilma Rouseff, was also at this same time defeated in their efforts in the capitol to force teachers to teach children that no one is born as a "boy" or a "girl" but that they choose their gender later in life.  Effectively they seek to ban the Portuguese equivalent of the word "boy" and "girl" and force educators to refer to all as the Portuguese equivalent for a "child" (criança), being that said child may or may not have chosen his or her gender yet.  The Gender Ideology was officially defeated and now the PT is going to the individual municipalities trying to establish it one by one in the states. Although nobody wants this, they seem intent on forcing it against the wishes of the population and in the name of "democracy" and you guessed it, "human rights".  Apparently, transvestites are already using the bathroom according to the gender they identify with putting the average woman at risk of being scandalized.  So much for human rights and dignity.  Is it any wonder that traditionalists see the Second Vatican Council as the root of the problem since it officially declared that the mere dignity of a person gives him a right to believe freely [2] and the new catechism of the Catholic Church [3] goes so far as to declare this a natural right meaning that God has given all the right to believe as they wish, something which anyone can easily point out as contradicting the First Commandment ?

There is no doubt that there is a huge agenda to push the acceptance of and promote homosexuality in all western societies and whoever disagrees with it is against "human rights" and "full of hate".  But the real question is that if there is a majority sodomite population, who really thinks that the rights of the minority will be upheld?  It's ridiculous to think such, and it would only be a matter of time before relationships of the opposite sex become scorned or even completely outlawed.  This would seem to lend a hand to the "global warming crowd" since green house gases are directly related to the other myth of "over-population".  When one looks at Francis in light of the agenda of his South American Liberation Theology counterparts, it is easy to see the correlation between all of this and where it is all going.  The Synod this fall threatens to be just one more step in the globalist agenda to promote acceptance of sodomy with the aim of a population majority of homosexuals and degenerates with the key move of tapping into the youths and the minds of the coming generations.  After all, it was after World Youth Day that the famous "who am I to judge" statement was made, and I don't think that that was any accident.  The new "encyclical" also falls in line with all of this of course, but most fail to see the significance.

Certainly, many have seen the recent video uploaded of the terrorist network ISIS executing spies horrendously by lowering several in a cage until they drown and switching to an underwater camera to record their deaths and chaining a few others together and recording the explosion of their heads while chanting Islamic "prayers". As we are way overdue for another Lepanto, the leaders in the Vatican continue to meet every so many years to pray together with Mohammedans and scandalize Catholics every so often with statements or acts that actually seem to confirm the false religion as far back as John Paul 2 kissing the Koran or as recent as Francis stating publicly that it is a "prophetic book of peace" [4].  Meanwhile the demographics in Europe are changing so fast that we are almost on the brink of seeing Europe handed over completely to the Mohammedans, in part for the degeneration and lack of large families of Europeans, and on the other hand due to the growing numbers of Mohammedans who are quickly taking their places.  "Germany and France have the largest Muslim populations among European Union member countries. As of 2010, there were 4.8 million Muslims in Germany (5.8% of the country’s population) and 4.7 million Muslims in France (7.5%). In Europe overall, however, Russia’s population of 14 million Muslims (10%) is the largest on the continent." [5]

While all this is happening, just earlier this month the top official for the Mohammedans in France has instructed his followers to convert Catholic churches into mosques, something that has already been happening as the droves of former Catholics are abandoning the Faith, which the newer generations have only come to know as presented to them in a watered down shell of the Novus Ordo, and the empty churches one by one are being handed over to the Mohammedans for use.  Does anyone really expect this to never hit home in North or South America?  It's only a matter of time.

Certainly these are dark times that we are in, and not many doubt this.  On one side there are the sodomites and on the other the growing threat of Islam and the authorities of the Church seem to have abandoned us to both.  It could be that in this is where we will see the providential mission of Russia. While many do not choose to trust Putin, it is no secret that he has presented himself as a stumbling block to the advance of the New World Order and the loss of Russian identity which must take place in order for Russia too to be swallowed up in the globalist plan.  Praying the the 15 decades of the Rosary daily for the consecration of Russia is important.

The modern outlook of "it's okay to be gay" should be combated vigorously.  The modern error is that we must not judge.  Everything is taken out of context and the only thing from Sacred Scripture being pushed is to not judge and to love.  Everything else is quickly forgotten.  This is quickly parroted by today's youth, and suddenly those who seem to oppose the sodomite agenda are now judged as hypocrites and hated.  It seems that the illiterate masses believe that they can cite the Bible against those who seek to do all that Christ mandated.  A complete perversion of the modern mind which seeks to pervert all that it comes in contact with.  Any idiot knows that Christ wanted us to judge the difference between right and wrong, but since few believe in such things as eternal damnation or the soul, it is a waste of time trying to explain to modern minds the understanding of not making a subjective judgement onto the souls of others.  In these regards we don't have much to do except watch and pray and wait for a great chastisement; is there any room for doubt?

It seems that a force for the advance of the sodomites is in changing language. This should be given consideration also.  They started by taking a completely neutral word with a positive meaning like "gay".  This term should be avoided because it is their agenda.  It is their terminology.  Words associated with shame that were all too common when I was kid shouldn't be termed as "hate". Suddenly if you use the word "fag" to describe a sexual deviant then you are labeled as a "hater".  People will even go so far as to say that they feel offended because they have a family member that is "gay".  One should not hesitate to inform them that homosexuality is a sexual aberration and is unnatural.  If this same person had a family member that was an alcoholic and sleeping in the street, would they be inclined to feel just as offended if you said something against being a drunkard?  Probably not.  In fact, the advance in the globalist agenda has caused a change in perspective on this note.  Whereas a drunkard would receive help from his family to overcome his problem, a person with a sodomite in their family treats the issue differently making sure to inform everyone that they accept and love the family member, something that actually works to encourage the unnatural act.  They could actually be considered no less different than accomplices of the alcoholic whom they also support in the alcoholism or crack addict whom they should support for the drug habit.  It's a complete perversion of principles that propagates the evil of our times and will only have a conclusion of leading to a majority of a sodomite population, which is good for your global warming and population control critics.  To work against this, those who are aware of the problem should not hesitate to set the good example for children and maintain a position with others which expresses the problem in words which invoke shame cost what it may.  The globalist seek to indoctrinate the minds of children in order to prepare the New World Order. 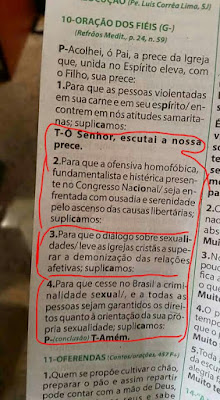 This week a Brazilian Jesuit priest of the diocese São Miguel Paulista in São Paolo, Brazil, Fr. Luis Corrêa Lima, published a prayer for the faithful in the ordinary of the Mass where he asks the Lord that the "the offensive, homophobic and hysterical fundamentalists in Congress to be confronted with courage and serenity by the rise of libertarian causes, we beseech thee"..."so that the dialogue about sexuality carries the christian churches to overcome the demonization of affective relationships, we beseech thee"......"so that in Brazil sexual criminality ceases/ and all people are guaranteed their rights as regards their own sexual orientation, we beseech thee".... [6]

2) Dignitatis Humanae, "A sense of the dignity of the human person has been impressing itself more and more deeply on the consciousness of contemporary man,(1) and the demand is increasingly made that men should act on their own judgment..."

3)The new Catechism of the Catholic Church states:
“The right to religious liberty is neither a moral license to adhere to error, nor a supposed right to error, but rather a natural right of the human person to civil liberty, i.e., immunity, within just limits, from external constraint in religious matters by political authorities. This natural right ought to be acknowledged in the juridical order of society in such a way that it constitutes a civil right.” (Catechism of the Catholic Church, §2108).