translated from The Dominicans of Avrillé by Br. Raymond of Pennafort, T.O.P.

Saint Vincent Ferrer
Among the thousands of saints in Heaven, each reflecting a different aspect of  uncreated Perfection, some express mercy and others justice. In some the Holy Spirit has more abundantly poured the gift of piety; in others, the gift of fear. There are sweet; there are the strong; there are the kind; there are the terrible. Not that sweet are weak, or that the strong are harsh. Not that the kind are flattering, or the terrible disheartening. Divine charity, animating all, puts into each one the delicately weighed measure of virtues which would seem to exclude themselves, because whatever the predominant element, what still dominates this is divine love and therefore the love of men.

Saints and terrible kinds of saints

The terrible saints are not devoid of sweetness; the amiable are able to be strong and even severe. Who has been more amiable than St. Francis de Sales ? Who has made ​​perfection more attractive and, at first glance, easier? However, make no mistake about it: the resignation that the Geneva bishop demanded of a smiling lady of the court is, if you look closely, as universal, as heroic as requesting a solitaire from Thebais from his disciples.

Saint Vincent Ferrier is terrible. This is the Angel of Judgment. God gave him the task of traveling around Europe, mainly to tirelessly talk to the people about their sins for thirty years, the importance of salvation, the blinding clarity of the final judgment, and the eternity of Hell . 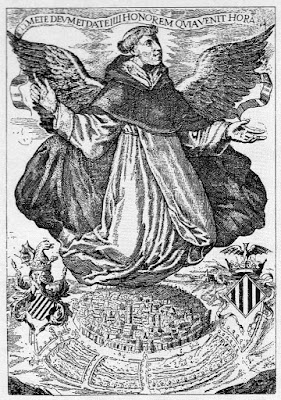 His influence has been prodigious. The conversions he obtained number in the tens of thousands. The
miracles by which he supported his word is countless. When one reads his life in the seminal work that R.P. Fages has dedicated to him, the best documented, most complete and most recent historian, one is stunned  [1]. If we dare to read it, we seem to be finally crushed, overwhelmed by everything supernatural. Yet this terrible man is good, gentle, and kind. He not only had mercy on souls, but also bodies. He who was so harsh, healed others. He who barely ate, multiplied the bread and wine. He made water gush forth. He built bridges. He was no stranger to poverty. He refused neither the small nor the humble.

The only point on which there is no concession is his vocation. He is the Angel of Judgment; he knows it; his whole existence is ordered to this thought. Despite this having been so austere, it was precisely what drew large crowds, led men to God, kept him safe, as never being a lover of compromise like  those who hope to do good by offering a watered-down Christianity, full of rich religious feelings and devoid of sacrifices, for souls to listen to.

For thirty years, the Angel of Judgment shouted to the world that no it was use to win if we lose our own soul, that life is but a breath, that death is at our bedside, that after this is the Judgement where there will only be an Eternal Paradise or everlasting Hell. These are good fundamental truths that can not be repeated enough. Do not be afraid to face them, for the fear they generate is beneficial. David complained in his time when he said that the truths were depreciated by the children of men: O Holy God! What would he say in our times with its anemic, ignorant faith, failing sentimental piety, oratorical precautions, even excuses, where preachers tremble at the thought of speaking on the four last things to a renowned Christian audience? They are afraid and nearly to the point that they imitate Louis XIV when ascending before the pulpit began by saying: "We will all die ... or almost all". 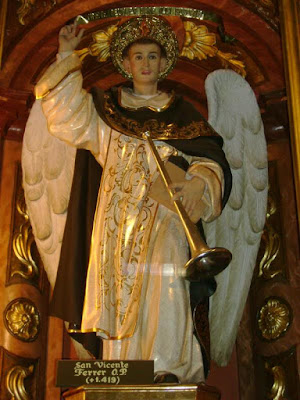 Vincent Ferrer, on the contrary, took to use saintly boldness. And if, as Father Lacordaire said, "the first requirement of a great life is great ambition," his life was great by his ambition to win souls to Jesus Christ, to pull them, no matter what, away from Hell. For this, he refused to maintain them in a false security by preaching about the God of the good people, the good-natured God fooled by the sinner. He resolved to show them what is real,what we cannot avoid, that no golden varnish used on teaching the catechism does not mitigate, namely the chastisement that God cannot refuse to impose on the sinner because it is complete justice . All the preaching of Saint Vincent was to boldly put his audience in front of the most terrifying and certain realities: Hell is the punishment of sin. If you do not repent, you will all perish.

The Angel of Judgment is therefore the saint of the hour. He stands his lofty stature before us and darts at us his eagle eye. On his forehead there is no shining star of Dominic or on his chest the sun of Aquinas, but two calm signs, as a fixed fire, suitable for luminous grandeur of doctors. What distinguishes him is the plume of ardent and dominantly flickering flame on his head, as also his two fingers lifted to the clouds from which the Son of man shall come to judge all men. Behind his white tunic and black cape we see his wings of the Angle of the Apocalypse. In his hand is a trumpet to awaken apathetic souls sleeping in sin. For those who contemplate his image and his attitude is found in his saying in life:
"Timete Deum quia venit hora eius iudicii; Fear God because the hour of his judgment is come."


Taken from the Dominican Missal
In Pashal Time:
Alleluia, alleluia! O glorious father Vincent, famous son of the Order of Dominic, pour forth your prayers to the sovereign judge for all nations who are devoted to you.
Alleluia! Luke 24,46. It behooved Christ to suffer, and rise again from the dead, and so enter into the glory of God. Alleluia.

Apoc. 14, 6-7.   "In those days, I saw another angel flying in midheaven, having an everlasting gospel to preach to those who dwell upon the earth and to every nation and tribe and tongue and people, saying with a loud voice, "Fear God, and give Him honor, for the hour of His judgment has come; and worship Him who made the heaven and the earth, the sea and fountains of waters."