BISHOP FELLAY AND HIS SUPPORT FOR A NEW BASTARD RITE 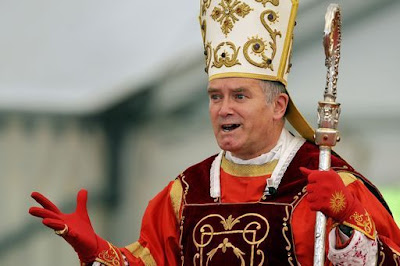 In his interview responding to the question: "What do you think of the proposition of Cardinal Sarah to introduce the traditional offertory in the new Mass?", Bishop Fellay said:

"It is not a new idea; it has been around in Rome for ten years. I am glad it has been taken up again. Some criticize the idea, saying it is a way of mixing the profane with the sacred. On the contrary, in the perspective of bringing health back to the Church, I think it would be an important progress, because the offertory resumes the Catholic principles of the Mass, of the expiatory sacrifice offered to the Blessed Trinity, offered by the priest to God in reparation for sins, and accompanied by the faithful. And that would gradually bring the faithful back to the traditional Mass they have lost."

What is this that Cardinal Sarah proposes and Bishop Fellay happily accepts?


"It would be equally desirable that an annex be inserted in an upcoming edition of the Missal [ordinary] the rite of penance and the offertory of usus antiquior, with the goal of emphasizing that the two liturgical forms enlighten each other, in continuity and without opposition."

This and nothing more is the objective of this "reform of the reform". This is also stated by arch-modernist Cardinal Kurt Koch:


"Here also shines the deepest sense of the reform of the reform put in motion by Pope Benedict XVI with the motu proprio; just as the Second Vatican Council had been preceded by a liturgical movement, whose ripe fruits were brought into the constitution on the Liturgy, also there exists today the need for a new liturgical movement, which has as its objective to bring to fruition the true heritage of Vatican II in the current situation of the Church, while consolidating the theological foundations of the liturgy . (...) The motu proprio is only the beginning of this new liturgical movement. In fact, Pope Benedict knows well that, in the long term, we cannot stop at a coexistence between the ordinary form and the extraordinary form of the Roman rite, but that in the future the church naturally will once again need a common rite. (...) The Motu Proprio can be converted into a solid ecumenical bridge if it is only perceived and received as 'a hope for the whole Church'."

Father Jacqmin SSPX gave a good warning speaking on the betrayal of Menzingen:

"Let's be careful.  This is the 'unity...in Vatican II': there are two Masses because there are two groups, and the conflict must lead to progress and evolution (cf. Pascendi No 36): the reform of the reform, 'the mass of St. Thesis' [a play on words in French for synthesis:translator] (as, according to Hegel, the useful and necessary conflict between a thesis and an antithesis produces a 'synthesis' that leads to progress through an evolution)."