Slander: A Modernist Tactic of Today and Yesterday 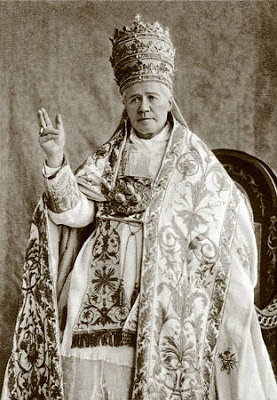 This being so, Venerable Brethren, no wonder the Modernists vent all their gall and hatred on Catholics who sturdily fight the battles of the Church. But of all the insults they heap on them those of ignorance and obstinacy are the favourites. When an adversary rises up against them with an erudition and force that render him redoubtable, they try to make a conspiracy of silence around him to nullify the effects of his attack, while in flagrant contrast with this policy towards Catholics, they load with constant praise the writers who range themselves on their side, hailing their works, excluding novelty in every page, with choruses of applause; for them the scholarship of a writer is in direct proportion to the recklessness of his attacks on antiquity, and of his efforts to undermine tradition and the ecclesiastical magisterium; (Saint Pius X, Pascendi)


Since the time of the last Pope-Saint, liberals and modernists have launched a vicious attack against fundamentalists, the true Catholics. For example, in his book The French Priest and Contemporary Society the ultramodernist Fr. Brugerette (1863-1943) expresses this about fundamentalists:


Grumpy spirits [unjust] interpreters of the teachings of the Church, without authority and without a mandate, [...] hypocritical race of heresy hunters. Some fighting in broad daylight, quite frequently, for the slander and libel of Catholics to whom they put the label of liberal.

But already by August 1911, the magazine of the Polish Jesuits of Austria-Hungary had denounced that:


... a group of zealots who make it as a duty to investigate everywhere, with a rare lack of consideration, the danger of modernism and of casting suspicions, under the cover of orthodoxy, against the wise and against Catholic organizations as being in favor of modernism.

Two years later, on September 6, 1913, the magazine of the Italian Jesuits, the Civilità Cattolica, attacked the "Catholics called fundamentalists", accusing them of defaming the German Catholics repeated the offense on September 20th stating:


..."Highly dangerous is the attitude of some who, for new designations, allow themselves to go to the odious exaggerations and confusions" and "seem to want to be taken as the representatives of the Holy See."

Father Rutten, a Belgian Dominican, delivered a sermon in the church of St. Augustine in Paris on January 26th, 1913, saying:


As for the scavengers of texts, the discoverers of heresies, the inquisitors with no mandate, the bulldogs of orthodoxy, I want to ask you, brothers, do not do them the honor of responding, but rather send them politely on their way.

In France, it was the magazine of the Jesuits Études in its No. 5 of January, 1914, that gave the signal for the great anti-fundamentalist offensive entitled: Críticas negativas y tareas necesarias (Negative Reviews and Necessary Tasks) which openly attacked a handful of publicists without mandate reproaching their passionate attacks and their complaints:


Do these publicists, who have neither the competence and taste nor restraint, have the monopoly over orthodoxy? Do you think the truth needs to be defended with their performance summaries, and in order to remain faithful, embalm it in a coffin of which they have custody?

The Mignon-Birot duo denounced an "irresponsible, anonymous and hidden power" that uses "the press and betrayal" that work "division by slander, by calumny, by a total neglect of the elementary rules of Christian charity in respect to deserving Catholics as well as to episcopal authority". And they added (with all Christian charity, of course): It is common knowledge that most of these condottieri with pens, under the authority of Archbishop Benigni [i], were disreputable people [...] it is a matter of unbalanced laity, priests who had difficulties with their superiors, or agitated religious who served paltry passions of position...

Are not these attacks shockingly similar to the most recent attacks?

-“Look at the caricature of Tradition that calls itself the ‘Resistance’, for example: it is a non-Catholic spirit that is almost sectarian. We wish to have nothing to do with it; it is a movement that is withdrawn into itself, with people who think that they are the only good and just men on earth: that is not Catholic.” Bishop Fellay, interview to Présent.

-"The 'resistance' does everything it can to instrumentalize Archbishop Lefebvre as being in favor of their ideas. However, the latter was too Catholic, too much a supporter of the universal Church to enter into the game of this sectarianism."- Fr. Pfluger, interview with Der Gerade Weg.

-"These people practice with rather great zeal, a religion they do not understand. They imagine that there is sin where often there is not (this is found among the moralists, the Jansenists)." Fr. Pfluger, ibid.

-Bishop Williamson is a "first-class provocateur" who "has always had strange ideas", "he exaggerates", "is a ticking time bomb", "uranium", "he does not study documents", has "Parkinson's disease", is "not a scholar", etc. (see here- note that there are three pages) In this same article, Bishop Fellay states that we have an appeal for extremists, who we don't even want.

-The Avrillé priests are not faithful to these principles, since they denigrate the authority of the successor of Archbishop Lefebvre and cast suspicion on the acts of his governing, in order to create dialectic between the members of the Society and their superiors, even by opposing the priests among them. [...] It is not the General House which is betraying the combat for the Faith; it is those who call themselves "the resistance" that are the ones that weaken it by their subversive maneuvers. Fr. Bouchacourt, Communiqué about the Dominicans of Avrillé.

Today, just as yesterday, the modernists and liberals work in much the same ways.

This is nothing new under the sun.


The quotes from modernists were taken from Christian Lagrave's work, The  Modernist Tactic, from Saint Pius X to Pius XI, infiltration and counterattack.