PUTIN AGAINST THE WEST'S APOSTASY AND SODOMY 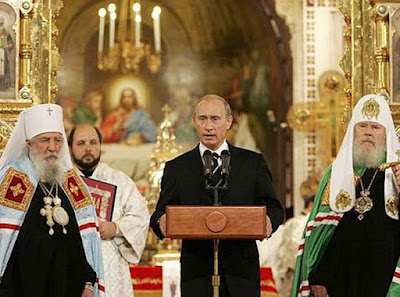 Putin accuses the West of taking the "way of degradation".

President Vladimir Putin -the former KGB agent of what was once an atheist state- rebuked the US saying that by abandoning traditional Christian values ​​and putting the same-sex marriage on the same level as a traditional marriage between a man, a woman and children, the US has given up on God and is worshiping Satan, and as a result , it is being led to a chaotic degradation and darkness.

At the height of the Cold War, it was common for American conservatives to label the extinct Soviet Union as atheist and a "nation without God". Two decades were sufficient enough to see that the situation has changed, as the Kremlin and the Russian Orthodox Church have made the same accusation to the West, quite justifiably, according to the Venezuelan website El Informer.

"Many Euro-Atlantic countries have moved away from their roots, including Christian values", said Russian President Vladimir Putin, in a recent speech. "The policies are pursuing these places to put on the same level of a family with children that of a partnership between persons of the same sex or to equate faith in God with belief in Satan. This is the way of degradation." In his speech to the Russian nation last December, Putin also portrayed Russia as a strong advocate of "traditional values" against what he describes as the moral bankruptcy of the West.

According to Putin "social and religious conservatism is the only way to prevent the world from falling into a "chaotic darkness".  As part of the defense of values, Russia has adopted a law banning "homosexual propaganda" in order to avoid the scandal to the little ones, and another law that makes it a crime to insult the religious sentiment of citizens.  The latter law was adopted following a protest at the largest cathedral in Moscow by a group of female punk rockers in an Orthodox Church.

The press cataloged the demonstration as "demonic" making it clear that the group was being financed by Americans.  Putin's views about the decline of the West were heard again this month by Patriarch Kirill I of Moscow, head of the Orthodox Church, who has accused the US, its satellite states, and Europe of being responsible for "spiritually disarming the people".  In particular, Patriarch Kirill criticized the laws of several European countries that prevent believers from wearing or displaying religious symbols, including pendants or necklaces with crosses, at work, interfering in the spiritual life of the people.