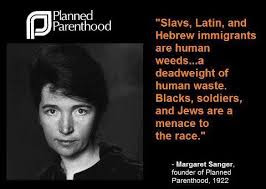 If there is any American justice this Planned Parenthood will be shut down quickly. Dr. Deborah Nucatola was recorded over a diner and some wine giving up all her secrets of murdering live babies and harvesting their organs to sell of to buyers.  At the end of the video, the "buyer" that recorded this admission thanks Cecile Richards the president and CEO of Planned Parenthood for bringing Dr. Deborah Nucatola.  The admissions in the video are startling.  She boasts of violating the abortion laws, and says that they are open to interpretation.  The manner in which she speaks of selling off organs of partial birth abortions is extremely graphic.  These people are monsters.


It should be noted that Planned Parenthood is the biggest US provider of abortions and lobbies for the abortion laws.  It has huge support among the community, mostly by liberals and leftists.  It was founded by Margaret Sanger, a noted eugenicist and racist.


The Content of this video may be startling, but there are no dead babies.  I refuse to repost videos or pictures of the operation of abortion on this blog.  Pass this video along so that the community is aware of this murderous organization.