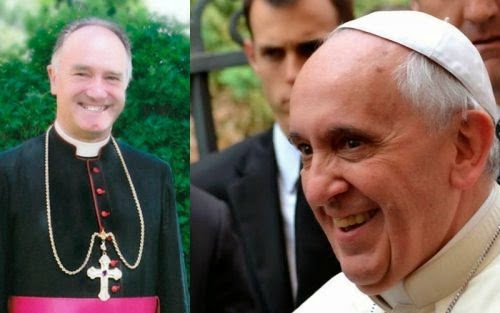 "Why should the poor be flatter'd
No, let the candied tongue lick absurb pomp,
And crook the pregnant hinges of the knee
Where thrift may follow fawning."
(William Shakespeare, Hamlet, Scene II, Act III)

(Vatican II is a poisoned cake. Interview of January 12, 2007 with Le Rivarol . Reproduced in the magazine Tradición Católica N ° 210)

Where do you see the Catholic Church in twenty or thirty years?                                           The New World Order, which accounts for the delicate apostasy in the Church, is advancing by        leaps and bounds.  But the Church is indestructible.  Therefore, one of two things will occur: in  either five, ten or twenty years God will intervene with an exemplary chastisement to restore order,  or the Church will be groaning in the catacombs waiting for this intervention.  However, the current  situation is irrecoverable through purely human effort.

If the crisis is extended, will you be willing to consecrate bishops without a papal mandate?Yes. But I hope not without the prudence required by the many circumstances.

We see then that Bishop Williamson is simply a consistent bishop with his words, understanding that the extreme circumstances justified it, and after a long deliberation, he performed the episcopal consecration of Bishop Faure. Therefore the charge of performing an act by surprise and thoughtlessly without reflection, without the required prudence is insupportable.
But perhaps one must look for another key-point of the cause of this whole series of statements from the Neo-SSPX condemning the episcopal consecration of Bishop Faure.  Why this persistent criticism from Menzingen?
The answer lies in the statement of the communiqué that the Resistance has the "need to replace the SSPX". Here we believe that the crux of the matter appears.  It is undoubtedly the institutional pride that comes out to maintain their victorious image, their reputation as a "champion of Tradition", first to Rome and then to their own members and supporters. First, to make them realize that the SSPX is not schismatic or sedevacantist or like resistant rebels who no longer have any relationship or link. Second, to make their faithful realize that the SSPX is still the same as ever, providing them with the Mass of all times and opposing the modernist errors of Rome. In the first communiqué they are lying completely. In the second communiqué they are lying partially.
The Neo-SSPX feels like Esau, who lost his birthright of Tradition for a mess of pottage... promised by Rome.
The Neo-SSPX is in great distress. On one side it fears returning again to be stigmatized if they are put "in the same category" of those that resist, thus moving away from the possibility of being recognized by Rome. On another, it fears that the Catholic fundamentalism of the Resistance will provoke some hint of dissent in its own ranks. It is clear that what has occurred has given more evidence of the traitors in Menzingen so that each time they may publicly be discovered as to what they are.
With all this it seems that there is not love of the Truth and love for the Church in Menzingen, but only love for itself. So like a tramp, they go about seeking approval, first in Rome, then from their faithful. Bought like a politician on the campaign trail, with a smile and a speech according to their listener. Not being enough to persecute the anti-liberal when they were within their ranks, they continue such persecution and condemn them when they are outside their ranks, joining with the conciliar church that it claims to not be a part of.
With "insane rashness" Menzingen released its communiqué condemning the episcopal consecration on the same day (even before Rome!), But not because it would lead to a "simple doubt", but rather, because they feared being associated publicly with such an act, which they know could complicate their "full reconciliation" with Rome. The statement of condemnation has been the worst mistake Menzingen has made, because it is precisely what ends up eliminating all the doubts that there may be hitherto of their intention to please Rome.
There will not be a signed paper with a Vatican letterhead, but the spirit of the Neo-SSPX already belongs to modernist Rome.