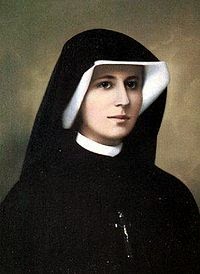 WHAT ARE WE TO THINK OF THE DIVINE MERCY DEVOTION?

Many people have certainly received graces from the devotion to Divine Mercy propagated by St. Faustina, and her personal piety was certainly most exemplary. However, this does not necessarily mean that this devotion is from God. It is true that Pope John Paul II promoted this devotion, that it was through his efforts that the prohibition was lifted on April 15, 1978, and that he even introduced a feast of Divine Mercy into the Novus Ordo. However, the fact that good and pious people receive graces and that Sister Faustina was pious do not necessarily means that it is from heaven. In fact, it was not only not approved before Vatican II. It was condemned, and this despite the fact that the prayers themselves of the chaplet of Divine Mercy are orthodox.

Condemned by the Holy Office
There were two decrees from Rome on this question, both of the time of Pope John XXIII. The Supreme Congregation of the Holy Office, in a plenary meeting held on November 19, 1958, made the following decisions:

The supernatural nature of the revelations made to Sister Faustina is not evident.
No feast of Divine Mercy is to be instituted.
It is forbidden to divulge images and writings that propagate this devotion under the form received by Sister Faustina.

The second decree of the Holy Office was on March 6, 1959, in which the following was established:

The diffusion of images and writings promoting the devotion to Divine Mercy under the form proposed by the same Sister Faustina was forbidden.
The prudence of the bishops is to judge as to the removal of the aforesaid images that are already displayed for public honor.

What was it about this devotion that prevented the Holy Office from acknowledging its divine origin? The decrees do not say, but it seems that the reason lies in the fact that there is so much emphasis on God’s mercy as to exclude His justice. Our sins and the gravity of the offense that they inflict on God is pushed aside as being of little consequence. That is why the aspect of reparation for sin is omitted or obscured.
The true image of God’s mercy is the Sacred Heart of Jesus, pierced with a lance, crowned with thorns, dripping precious blood. The Sacred Heart calls for a devotion of reparation, as the popes have always requested. However, this is not the case with the Divine Mercy devotion. The image has no heart. It is a Sacred Heart without a heart, without reparation, without the price of our sins being clearly evident. It is this that makes the devotion very incomplete and makes us suspicious of its supernatural origin, regardless of Sister Faustina’s own good intentions and personal holiness. This absence of the need for reparation for sins is manifest in the strange promise of freedom from all the temporal punishment due to sin for those who observe the 3:00 p.m. Low Sunday devotions. How could such a devotion be more powerful and better than a plenary indulgence, applying the extraordinary treasury of the merits of the saints? How could it not require as a condition that we perform a penitential work of our own? How could it not require the detachment from even venial sin that is necessary to obtain a plenary indulgence?

Presumption in the Writings of Sister Faustina
The published Diary of Saint Maria Faustina Kowalski (Marian Press, Stockbridge, MA, 2007) also indicates several reasons to seriously question the supernatural origin of the more than 640 pages of voluminous and repeated apparitions and messages. The characteristic of any true mystic who has received supernatural graces is always a profound humility, sense of unworthiness, awareness and profession of the gravity of his sins. Yet this humility is strangely lacking in Sister Faustina’s diary. On October 2, 1936, for example, she states that the “Lord Jesus” spoke these words to her: “Now I know that it is not for the graces or gifts that you love me, but because My will is dearer to you than life. That is why I am uniting Myself with you so intimately as with no other creature.” (§707, p. 288). This gives every appearance of being a claim of being more united to Jesus than anybody else, even the Blessed Virgin Mary, and certainly more than all the other saints. What pride, to believe such an affirmation, let alone to assert that it came from heaven!
In April 1938, Sister Faustina read the canonization of St. Andrew Bobola and was filled with longing and tears that her congregation might have its own saint. Then she affirms the following: “And the Lord Jesus said to me, Don’t cry. You are that saint.” (§1650, p. 583). These are words that most certainly no true saint would affirm, but rather his sinfulness and unworthiness of his congregation. This presumption in her writings is not isolated. She praises herself on several occasions through the words supposedly uttered by Jesus. Listen to this interior locution, for example: “Beloved pearl of My Heart, I see your love so pure, purer than that of the angels, and all the more so because you keep fighting. For your sake I bless the world.” (§1061, p. 400). On May 23, 1937 she describes a vision of the Holy Trinity, after which she heard a voice saying: “Tell the Superior General to count on you as the most faithful daughter in the Order” (§1130, p. 417). It is consequently hardly surprising that Sister Faustina claimed to be exempt from the Particular and General Judgments. On February 4, 1935, she already claimed to hear this voice in her soul: “From today on, do not fear God’s judgment, for you will not be judged” (§374, p. 168). Add to this the preposterous affirmation that the host three times over jumped out of the tabernacle and placed itself in her hands (§44, p. 23), so that she had to open up the tabernacle herself and place it back in there, tells the story of a presumption on God’s grace which goes beyond all reason, let alone as the action of a person supposedly favored with innumerable and repeated mystical and supernatural graces.
It is perhaps not accidental that Pope John Paul II promoted this devotion, for it is very much in line with his encyclical Dives in Misericordia. In fact, the Paschal Mystery theology that he taught pushed aside all consideration of the gravity of sin and the need for penance, for satisfaction to divine justice, and hence of the Mass as being an expiatory sacrifice, and likewise the need to gain indulgences and to do works of penance. Since God is infinitely merciful and does not count our sins, all this is considered of no consequence. This is not the Catholic spirit. We must make reparation for our sins and for the sins of the whole world, as the Sacred Heart repeatedly asked at Paray-Le-Monial. It is the renewal of our consecration to the Sacred Heart and frequent holy hours of reparation that is going to bring about the conversion of sinners. It is in this way that we can cooperate in bringing about His Kingdom of Merciful Love, because it is the perfect recognition of the infinite holiness of the Divine Majesty and complete submission to His rightful demands. Mercy only means something when we understand the price of our Redemption.
link to original: The Angelus Online
Postado por Ir. Raimundo de Pennafort, T.O.P. às segunda-feira, abril 20, 2015