MINISTRY OF FOREIGN AFFAIRS AND WORSHIP
SECRETARIAT OF WORSHIP

That under Protocol No. 084/15 dated February 23, 2015, the Archbishop of Buenos Aires, Cardinal Mario Aurelio POLI requests that the "FRATERNITY OF THE APOSTLES OF JESUS ​​AND MARY" (SOCIETY OF ST. PIUS X) is taken, until the definitive legal framework in the Universal Church is found, as an Association of the Rights of the Diocese, as regulated by canon 298 of the Code of Canon Law, in fieri to be a Society of Apostolic Life, with all the benefits that correspond to this and in compliance with all the obligations referred to it, also assuming to it the responsibilities of the diocesan bishop.

That said fraternity is accredited as a juristic body publicly within the ROMAN CATHOLIC APOSTOLIC CHURCH, according to the rules of the Code of Canon Law.

Which according to its statutes, approved by the competent ecclesiastical authority, the fraternity is a priestly society of common life without vows, in imitation of the societies for Foreign Missions (conf. Chapter I, Article 1, Statutes of the Society of the Apostles Jesus and Mary).

That Article 3, subsection f) of Decree No. 491/95 authorizes registration in the registry created by Law No. 24,483, to juridical bodies recognized by ecclesiastical authority which are similar or analogous to the Institutes of Consecrated Life and societies of apostolic life.

That the applicant institution has complied with all the requirements of current legislation, accompanying its statutes, the decree of erection and memory, in accordance with the provisions of Law No. 24,483.

This corresponds to accede to this entry whenever the petitioner falls within the terms provided by Rule 3, subsection f) of Decree No. 491/95.

This measure is issued in exercise of the powers conferred by Article 17 of Decree No. 491/95.

THE SECRETARY OF
WORSHIP

ARTICLE 1 - To recognize as a legal body "THE FRATERNITY OF THE APOSTLES OF JESUS AND MARY" (Society of St. Pius X), Association of Diocesan Right, with a registered seat and special address on the street Venezuela N ° 1318, AUTONOMOUS CITY BUENOS AIRES, which is registered under the number ONE HUNDRED EIGHTY (381) Registry Institutes of Consecrated Life.

ARTICLE 2 - To grant this entity the character of an entity for the public good for all purposes as deemed appropriate.

ARTICLE 3 - Let it be known that the referenced legal body is benefited by the treatment provided by Article 20, subsection e) of the Law on Income Tax (text ordered in 1997).

ARTICLE 4 - That it shall be communicated, published, and submitted to the Official National Registry and filed. - Emb. WILLIAM R. OLIVERI, Secretary of Worship.

SEE ALSO THE ARTICLE FROM CLARIN, Newspaper from Argentina 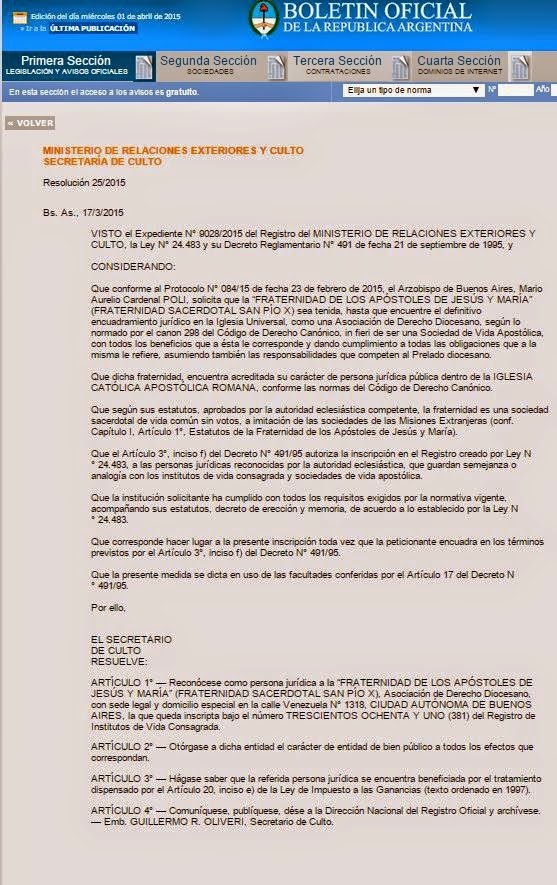