THE CONTROVERSY OF THE FSSPX IN ARGENTINA: THE ATTORNEY RESPONDS 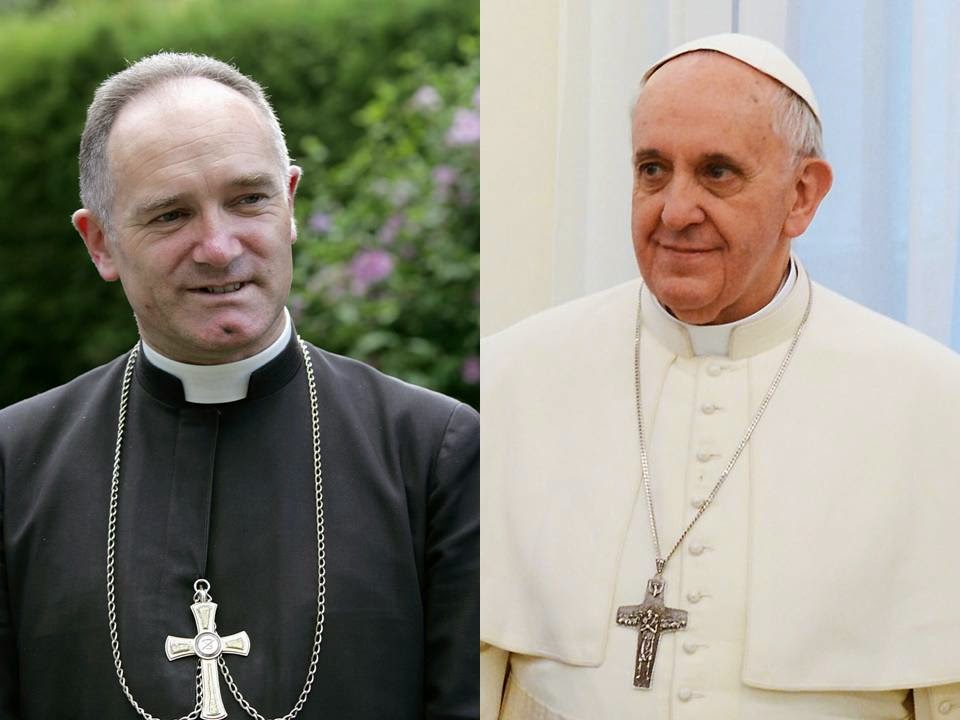 (Note from blog: This Argentine lawyer has made an assessment of the situation, which has been confirmed by two other attorneys before posting.  Note that the source is not a resistance source but is a friend blog of Rorate Caeli and is often cited by them.  The attorney wishes to maintain his anonymity, which does not invalidate any of his claims.  The site that this was taken from is operated by a handful of priests, some of them diocesan and some with the FSSP. In the section of authors on the site (Adelante la Fe) you will see pictures and short bios about the contributors of the blog.  I do not agree with the author's ideas, that he may or may not have, regarding religious liberty or the SSPX being outside the Church.  I only publish this translation because of the controversy that has arisen and the attempt by others to attack this attorney's claims on the mere pretext of his anonymity.  If what he has stated is completely true regarding the legal analysis and details that show that Rome and Menzingen have collaborated in leaving the SSPX in Argentina in a checkmated position, then it must be published. His anonymity is a mute point.  Initials suffice.)

Note from Adelante la Fe: The author of the legal analysis about the legal approval of the SSPX, who remains anonymous besides belonging to the Argentine judiciary system, brings us this text in response to many of the questions and issues that his article had raised, as much as from commentators as from numerous media where it has been reproduced.

Cardinal Poli: the SSPX “... is a juridical person within the Apostolic Roman Catholic Church, in conformity with the rules of the Code of Canon Law ..."

This was written and signed by Cardinal Mario Aurelio Poli in the presentation in File 9028/2015 of the Registry of the Ministry of Foreign Affairs and Religion of Argentina.

At the request of the director of the web page to make an analysis of the recognition -made by the Resolution 25/15 of the Ministry of Religious Affairs of Argentina- of the SSPX as a part of the Catholic Church, first I made a quick, brief comment which was placed with more detail, then a detailed analysis of a technical nature (if the term is suitable) and then another analysis, also quick, regarding the impact of the media- which the editor placed as a new update.

I confirm the content of what I wrote about in the legal analysis.  And also the speculations in the extensions, but they do not have anything to do with the technical analysis, rather they are derived from the interpretation of the facts.

It is worth clarifying that, beforehand, I did not harbor any dislike for the SSPX, which I believe will be in the great history of the Catholic Church for preserving the great treasure of Tradition.  The SSPX is not established in the place where I live, but I went to the church on calle Venezuela [street] in Buenos Aires, where I also acquired several books that cannot be found elsewhere.

Given the virulence of some comments I must clarify some points, knowing that the law, generally, is controversial and even the wording of clear and explicit legal rules are debated.

Is the Catholic religion the official religion of Argentina?

The National Constitution in art.2 speaks of the support of the religion. After the 1994 reform, the catholicity of the President is no longer a requirement, and neither is the requirement of the native Indians to convert to Catholicism – a completely anachronistic law-. There is no express provision to declare as such, except for a theocratic state (eg. Iran); I do not think we can find states with an official religion, if we use that requirement. The official site of the Argentine government would support whoever objects to the character of the official religion of Catholicism.

For decades, Dr. Germán Bidart Campos, the country's most prestigious constitutionalist, maintained the theory that Catholicism was the official religion and even considered it set in stone (i.e. unchangeable for a new Constitutional Convention). Today it is undoubtedly controversial. I repeat: the Catholic Church has a unique legal status in the Civil Code and remains in the new reformed code at any time to be enforced, which earned criticism from progressives.  But the laws of the civil code are not only a demonstration of this, but also the salaries of the Bishops, of the controversial tax exemptions -income tax, the existence of chaplaincies (with salaries of priests) in federal and provincial police, the Argentine Army, the Argentine Navy, the Air force, Prefecture, the Gendarmerie, the Federal Penitentiary Service, public hospitals, etc., with the construction of chapels on their land and religious images in their offices.  There are also religious images in judicial offices and other administrative entities. The President swears by a Christian formula and to the Holy Gospels.  All other religions have absolute freedom to preach, but none of them have been granted any official recognition of their activity [as has been the case with the Catholic religion].

On national holidays the official authorities of the Nation and the Provinces attend the Te Deum in the respective cathedrals, the most significant of these being the one held in the Metropolitan.
The issue is controversial, but it is official, "informal" or privileged, the Catholic religion has an absolutely different status from the rest of the thousands of religions recognized in the Nation. Simply enter the website of the Ministry of Religious Affairs to check.  Yes there is absolute freedom of religion, and this is a fact that will be of much use.

Is Resolution 25/15 a simple administrative procedure?

Legally it is an act of Public Administration, but not a mere formality, since it is declaratory of an existing reality and not constitutive of a new reality.  If I create a banking company and would like to start operating as a bank, I should establish the juridical person, it would be authorized by the General Inspectorate of Justice and the Central Bank, and then it would just begin to exist, at the opening of the doors of my financial institution.

Consider art.3 paragraph f of Regulatory Decree 491/1995 (cited as the basis of Resolution 25/2015). They may enroll in the REGISTER OF INSTITUTE OF CONSECRATED LIFE: f) Other juridical persons recognized as such by the competent ecclesiastical authority and by its likeness and analogy with the above are admitted in the Register by reasoned decision of the authority of the application (emphasis mine).

Our country asks for input from a series of documents authenticated by official bodies of the Church itself and the endorsement of the local bishop, in this case Cardinal Mario Aurelio Poli, who flat out said in his presentation (transcribed in the fundamentals of Resolution 25/15) that said Society is accredited the character of a public, juristic person within the Apostolic Roman Catholic Church, in conformity with the rules of the Code of Canon Law.

I reiterate: Archbishop Poli, successor of the Apostles and member of the College of Cardinals, said in his presentation to the Ministry of Religious Affairs, that the SSPX is a public, juridical person within the Church and in conformity with the rules of the Code of Canon Law. Ergo, it has a regular canonical status as a public entity within the Church, and it is of a public character, -and not a mere association of faithful- which is consistent with the statement of the official website of the SSXP South America: “The Society of St. Pius X was founded in 1970 and its statutes were approved on November 1st of that year by Bishop Charriere, Bishop of Fribourg (Switzerland). Like any other congregation, the Society of St. Pius X was erected as a congregation of diocesan right. Its foundation does not date from 1988 and it is not linked to any suspicion of illegality".

Consequently, the resolution of the Argentine State is not only important because of what it says, but because it proves indirectly that for Archbishop Poli the SSPX is a juridical person and in good standing in conformity with the rules of Canon Law, whose scope is universal.

Again I say that the resolution has canonical consequences, despite the communiqués that state the contrary, unless these things, against any Logic, can exist and not exist at the same time.

Was this recognition necessary for the operation of the SSPX, which it qualifies as a purely administrative procedure?

From the statements of the DICI agency linked to the SSPX, it is worth noting that in Argentina there is freedom of religion and that the operation of schools, hospitals, or any other work intended for the common good may well be conducted as a civil partnership.

At best in this regard, we have the example of the case of the Universidad Austral that is a civil association without a legal link with Opus Dei, nor the Catholic Church, despite several of its members expressly acknowledging that they belong to the Prelature. This civil association had no impediments to achieve important public and private grants, and sustains a premier University with a prestigious University Hospital.

A substantial difference -which the Resolution 25/15 expressly refers to- is the exemption from income tax, but ultimately a completely material and worldly type of question order which did not justify such a turnabout in the relationship between Church and SSPX. Can we assume that this administrative act had a merely material purpose? No way is this possible knowing the difficulties endured for years by the SSPX for being outside the Catholic Church. (note from translator: the SSPX was never outside the Church, remember that this article is translated from an Ecclesia Dei source)

Was it a routine administrative procedure?

Definitely not, but this is supposing that it was illegal. Yes it was an extremely rapid process, where in less than a month the case was initiated and approved, despite requiring extensive documentation, having to be certified and translated into the national language, besides the normal time evaluation of the administrative body to resolve accordingly.

If you enter the website of the Ministry of Religions it will be noted, by way of example, that the "Dominican Sisters of the Immaculate Conception" began the record in 2000 (no. 22277/00) and obtained a favorable resolution in 2005 (No. 1475/00, dated 06/27/05).  On the same date, the Redemptorist Missionary Sisters were enabled, whose record dated from the previous year (no. 25213/04).  In this regard, you can consult the Official Gazette where bothresolutions were published.

If you are interested in knowing the list of all the Institutes of Consecrated Life and administrative procedures, you can enter this website.  This list is also proof of the dissimilar treatment that is given to the Catholic Church.

By way of conclusion

The importance of this resolution is shown in that, officially, the Archbishop of Buenos Aires recognizes the SSXP as a juridical person under public law within the Catholic Church, with a regular canonical condition.

Furthermore, as happened many times in questions dealing with common law (mainly in sensitive and controversial issues), it is a matter of an important precedent (leading case) of great value, that in some way may go unnoticed in the Universal Church.

I know nothing of the scenes of the case.  Whoever wants to know more can enter Panorama International Catholic, a site that I highly regard.  Sure, I can speculate on serious grounds, from the analysis of the legal act, about the documentary records that are invoked, about the formalities of other Institutes of Consecrated Life and tight deadlines, that it is a matter of something previously agreed and arranged in its presentation, impossible without the consent of Rome and Ecône.