Response to the SSPX Denunciation of Bishop Faure’s Consecration

Response to the SSPX Denunciation of Bishop Faure’s Consecration 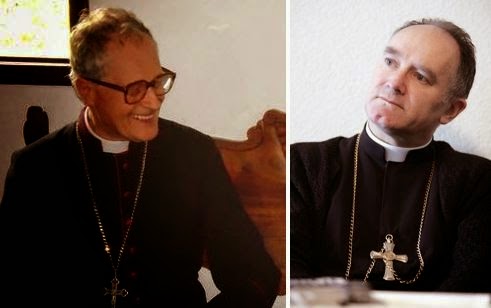 We are in a state of necessity.
The SSPX’s denunciation states that there is a “present state of necessity [which] renders legitimate its [own] action throughout the world”.1 We agree there is a state of necessity. Thus, when determining whether it is justifiable to consecrate a Traditional Catholic bishop at present, we must consider that we are in this state of necessity (as was Archbishop Lefebvre’s consecration of four bishops in 1988).
The situation has gotten worse since 1988.
The SSPX states that Archbishop Lefebvre decided to consecrate bishops in 1988 because of the first Assisi meeting and because the conciliar popes’ professed religious liberty.2 After 1988, these problems have greatly worsened. There have now been three Assisi meetings and the hierarchy has strongly professed religious liberty (and many other errors) for an additional 27 years. Thus, after 1988, the need is even greater to take steps to preserve Catholic Tradition by preserving the Episcopacy.
The SSPX bishops are not enough.
Not only have the SSPX bishops progressively weakened, but the SSPX bishops refuse to supply Holy Oils (necessary for some sacraments) to priests who oppose the SSPX’s new direction.3 The SSPX bishops also refuse to ordain seminarians who oppose the SSPX’s new liberalism. Id.
The consecrations in 1988 and in 2015 do not confer jurisdiction.
The SSPX states: “In 1988 Archbishop Lefebvre had clearly indicated his intention to consecrate auxiliary bishops who would have no jurisdiction, because of the state of necessity”.4 Similarly, the Mandate for Bishop Faure’s consecration states: “By this handing down of the Episcopal power of Orders, no Episcopal power of jurisdiction is assumed or granted”.5
The SSPX falsely says that Bishops Williamson and Faure are unwilling to talk with Rome.
The SSPX states: “Bishop Williamson and Fr. Faure have not been members of the Society of St. Pius X since 2012 and 2014, respectively, because of their violent criticisms of any relations with the Roman authorities.”6 Contrast this unsupported SSPX assertion, with Bishop Faure’s recent statement that he is willing to go to Rome, but with caution:

Q. If in the future you were invited to go to Rome and speak with the pope would you go? What would you say?
A. First, I would consult with all of my friends in the resistance. I would go with Bishop Williamson and the other excellent priests that accept the combat of the resistance with much valor. And I would keep all of our friends well-informed with all transparency.7

All the declarations of Bishop Williamson and Fr. Faure prove abundantly that they no longer recognize the Roman authorities, except in a purely rhetorical manner. 8

Contrast this unsupported SSPX assertion, with Bishop Faure’s recent statement that sedevacantism is an error.9 Further, Bishop Williamson quite often teaches against the error of sedevacantism. In his May 7, 2011 Eleison Comments, he wrote: “I, for one, believe the Conciliar Popes are valid Popes.” Bishop Williamson followed this up by additional articles against sedevacantism: Eleison Comments ## 279, 341, 342, 343, 359, 385 and 401, between November 2012 and March 21, 2015.
Because it is a matter of public record that Bishops Williamson and Faure stand against sedevacantism, the SSPX insinuates that they speak “in a purely rhetorical manner”. In other words, the SSPX says those two bishops are sedevacantists but they won’t admit it.
This calls to mind Bishop Fellay’s 2013 denunciation of (unnamed) persons who assert he seeks a deal with Rome. He complained that those persons “pretend that I think something else from what I do. They are not in my head.”10 So Bishop Fellay complains that (unnamed) persons speculate that he wants a deal with Rome but that he will not admit the fact. But the SSPX feels free to accuse Bishops Williamson and Faure of being sedevacantists who won’t admit it. Doesn’t the SSPX see the irony of this?